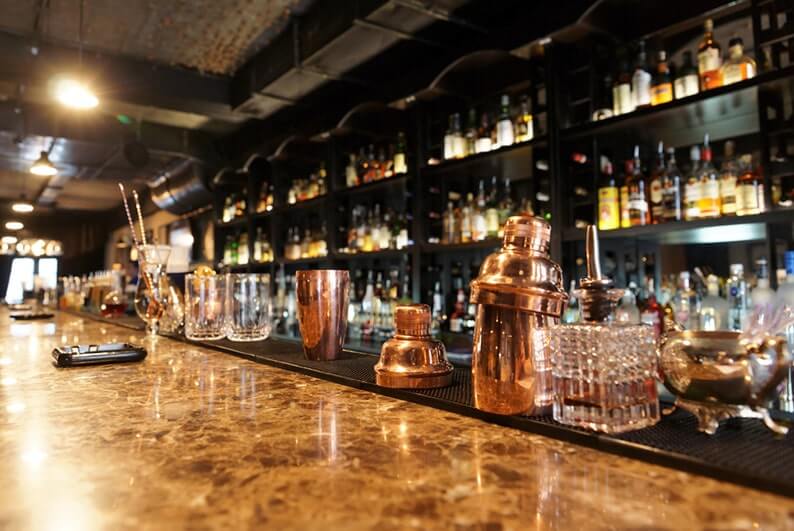 Sometimes you wanna go where everybody knows your name, right? While there’s only one Cheers, the opportunities and choices in the bar industry are plentiful. Experts say bars and nightclubs brought in more than $30 billion in 2019. After a financial downturn due to the pandemic, analysts expect the industry to continue its upward climb to recovery.

Founded in 1982 and based in Atlanta, Georgia, BWW has been franchising since 1991 and has 638 franchise units — contributing to more than 1,200 locations across 10 countries.

Potential franchisees should know there’s a minimum commitment to develop at least two restaurants. Initial investment is around $1,997,700. Required franchisee net worth is $1,500,000 with $750,000 in liquid assets.

Hooters began back in 1983 and started franchising three years later. As of now, they have 225 franchise units.

Potential franchisees are required to open a minimum of three locations according to their development agreement. Candidates must have at least five years of restaurant experience to be a Hooters’ franchisee. Initial investment ranges from $956,500-$4,275,000. Required franchisee net worth is between $2,500,000 – $3,000,000 with $1,500,000 in liquid assets.

Dusting off barstools since 1985, Beef O’ Brady’s began franchising in 1998. Currently, the franchise has 127 units across the country.

Buffalo Wings & Rings got its start back in 1984 and has been franchising since 1988. The company currently has 60 franchises in the United States and is looking to open more locations in the south and mid-west parts of the country.

This Scottish/Celtic-themed bar started in 2003 and began franchising three years later. The brand currently has 43 units across the United States.

Franchisees are required to have five years of previous business ownership and management or multi-unit restaurant management experience. Franchisees can expect to pay an estimated total investment of $887,000–$1,200,000 and an initial franchise fee of $75,000. Financial requirements include a net worth of $1,750,000 with $750,000 in liquid assets.

Brass Tap has been an innovative craft beer bar since 2008. Franchising since 2010, Brass Tap franchisees do not need any previous franchise or pub experience. Unlike typical casual dining franchises, you won’t have the staffing, space, equipment, and inventory demands of a full kitchen. Multi-unit agreements are available for investors.

The Brass Tap has a total of 47 franchise units. Franchisees can expect to pay an estimated initial investment of $791,970.

Bar Louie combines a national brand with local appeal. No two Bar Louie restaurants are alike, but each has a modern and relaxed vibe. Bar Louie has been franchising since 2006 but opened its first location back in 1990. Currently, the brand has 19 franchise units. Potential franchisees can expect to pay an initial investment of $763,500.

Old Chicago Pizza and Taproom opened its first location in 1976 and started franchising in 2000. Currently, Old Chicago Pizza &Taproom has over 100 franchise units across the United States.

Founded in 2010 by a team of rock and roll enthusiasts, including KISS band members Gene Simmons and Paul Stanley, the brand started franchising ins 2012. As of now, Rock & Brews has 16 franchise units.

The first Certified Green Restaurant in Pennsylvania, Arooga’s was founded in 2007 in Harrisburg; and began franchising three years later. They currently have 18 units and are looking to expand into many more markets.

Offering its own brewed beer, Voodoo Brewing Co. was founded in 2005. The brand has styled its model after a typical European beer hall — customers order and pick up at the counter themselves, reducing staffing numbers. Foodservice or hospitality industry experience is helpful but not required of franchisees.

Known as the birthplace of the buffalo chicken wing, back in 1964, Anchor Bar has been franchising since 2009 and currently has 14 franchise locations. Franchisees should expect to invest a range of $600,000–$950,000 to get their location open.

This boxing-themed sports bar is famous for serving beer at a chilling 26 degrees. Knockout has also made a name for serving the healthiest fat-free wings.

Think you’ve found your next franchise venture? Our team of franchise consultants can help you find the right bar franchise opportunity for you. Our six-step matching process allows us to learn about you and your goals so we can source the best franchise options for you.

Our franchise consultation is completely free to you. We will guide you through every step of the process until we find a franchise that’s the right fit for you. Don’t put off your dream of owning a bar franchise any longer — contact us!

Let us match you with the perfect franchise.

There are many franchise opportunities out there, it can seem overwhelming to the untrained eye. That’s what we’re here for. We’ve got the knowledge.

Contact us today.
Let us match you with the perfect franchise. Call today for a free franchise consultation.